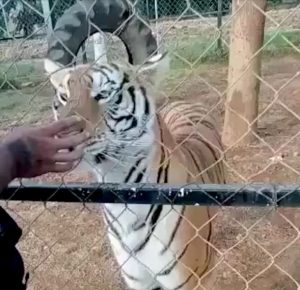 Tragedy struck in Periban, western Mexico after a zookeeper was fatally mauled when he put his hand through a fence to stroke a tiger during feeding time.

The incident which took place in a private zoo was captured on camera and the video has gone viral.

The horrific footage of the attack shows the big cat sinking its claws into his hand and pulling his arm into its mouth.

The keeper identified as Jose de Jesus, 23, reportedly died in hospital after the attack in Periban, western Mexico.

The video shows Jose beckoning the Bengal tiger over to a chain link fence.

The situation changed as he starts to stroke the beast’s neck. The tiger’s mood suddenly changed and it suddenly savages his right hand.

As Jose screams in agony, the tiger pulls his hand towards its jaws and razor-sharp teeth.

Another gruesome video shows a huge pool of blood on the ground.

Jose was rushed to hospital where reportedly refused to allow doctors to amputate his mangled hand.

Complications then set in and Jose – who was a diabetic – died from a massive heart attack, doctors told local media.

The grim video footage was reportedly released by the owner of the tiger who kept it in a private zoo along with other tigers, a lion and a crocodile.

The owner claimed the video shows the keeper had been negligent, reports Daily Sun.

He added he had paid Jose’s medical bills, and insisted he had all the necessary permits.

It came after local media reported authorities were checking whether the owner had a licence from the Ministry of the Environment and Natural Resources to keep the animals.