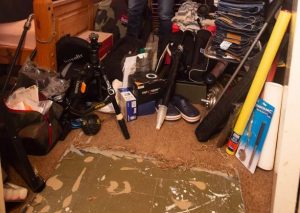 A man has experienced extreme shock after his flat was flooded with his neighbour’s waste for a week.

Rob Escott, 47, was completely horrified when he came home to his council-owned flat in Cardiff only to find it swamped with a two-inch deep pool of raw sewage.

What caused the flood was a blocked outside pipe which opened the way to all of Rob’s neighbours’ waste being pumped into his flat via his toilet.

The disturbing part of the story was that while the blockage was cleared by a plumber just a few hours later, it took far longer for the mess to be fully cleaned up.

Despite endless attempts to get teams from Cardiff Council out to his flat to clean up the mess as soon as possible, Rob claims it was nearly 48 hours after the initial incident that a cleaning team arrived at the property after the leak.

Rob claims the team was unprepared for the job, initially bringing just a single bottle of bleach with them to clean up, reports Wales Online.

He further said that the contracted cleaning team then downed tools after working at the flat for two days and said they would not resume work until the council conducted an inspection.

What this meant that part of his flat remained contaminated with human waste until the job was finally completed on Tuesday, June 14, more than a week after the flooding occurred.

Rob was forced to sleep on his sofa during that time despite being in significant discomfort after previously breaking his neck and back.

Incredibly, this is not the first time that his flat has been contaminated with his neighbour’s sewage, with the same issue occurring just a few years ago.

However, while Rob says that the council were proactive in solving the problem the first time around, their actions in the last week have been “totally unacceptable”.

He claims he was offered a place in a homeless shelter while the mess was cleaned up.

Rob had discovered the horrific flooding after returning home from dropping his sick dog off at the vets on Monday afternoon.

He told WalesOnline: “My mother had stayed at mine the night before ahead of taking my dog down to the vets

“I was already feeling down when we got back to the flat, and my mother went in first and she immediately said: ‘What the hell is that smell?’ I looked on the floor and there was two inches deep of sewage water all over my flat.

“My flat was completely flooded. It absolutely stank and there was faeces and toilet paper everywhere. I realised quite quickly that the sewage had come in through the toilet.

“Because of the blockage, every time my neighbours flushed their toilet, it would hit it and then come up through the pipe and out into my bathroom – mine is the only one that is flooded.

“When I saw how far it had spread, I just thought: ‘Oh my God’. It had gone into cupboards, onto the carpet in my bedroom and living room and under the tiles in the bathroom. It was everywhere.”

But his ordeal was far from over as the horrendous mess remained. 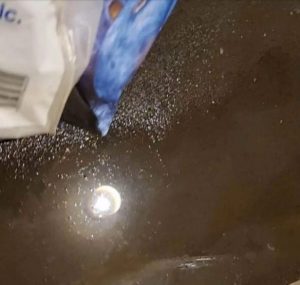 Rob said: “I was chasing them up the whole day. “I was desperate to get a cleaning team round as my flat was absolutely disgusting. I rang them 38 times in total, but nothing seemed to make a difference.

“I started to feel like I was a bit of a joke in the council offices, I was ringing so many times and being told the same stuff. Ultimately, nobody turned up like I was told they would.”

Rob even claims that he was told by a member of the council repair team that it was “our job to clear the blockage, but not to clean up the mess.”

“You can imagine how bad the smell was after nearly two days,” he added. “It was absolutely disgusting and I said to one of the managers that I couldn’t stay there. It was then that he said he could put me up in a nearby homeless shelter. I couldn’t believe it.”

“I had a nice flat, it’s not my fault the place has been completely flooded. There are real health concerns and I’m not meant to but to be offered a place in a homeless shelter was just unacceptable. I couldn’t believe what I was being told.”

Rob’s formal complaint to the council paid off as a cleaning team eventually arrived at his flat on Wednesday, 48 hours after the flooding was discovered, reports Daily Sun.

“They turned up with this little 250ml bottle of Dettol,” he claimed. “I used to throw a whole one of them in the bath after a rugby game.

“From what they were saying, I think that they thought I had pooed on the floor in my bathroom and they were there to clean that up.

“I looked at the bottle and thought, that’s not going to do the job and it certainly didn’t. When they went home, the bathroom still absolutely stank, because the sewage water had gone all down the cracks in the tiles. It just was never going to cut it, it was ridiculous.”

The team then came back the next day with industrial cleaning products.

However, that afternoon, Rob said the team “downed tools” as they had only been contracted to work at the flat for two days, despite severe contamination.

“They were just over halfway through the cleaning when their boss rang them at around 4pm and told them to stop working,” he said, claiming: “They said they wouldn’t resume work until the council conducted an inspection of the flat, but they refused to send one, saying that they considered the job completed.

“It really felt completely hopeless at that stage. It was a Friday afternoon by then and I knew that it wouldn’t get sorted until next week.”

It was gathered that a council representative did eventually visit the flat on June 13, at which point Rob had been living in the contaminated flat for a week.

While the cleaning was eventually finished on the Tuesday, Rob has been left appalled by his treatment at the hands of the council and says he plans to take legal action.

He said: “The whole ordeal has been horrendous.I’m sleeping on my sofa in the front room, which is terrible for me as I broke my back and neck in an accident I had years ago.

“But it’s still better than being put into a homeless shelter.

“This flooding has happened before, but the first time the council were great, they dealt with it quickly.

“There has been no urgency and no communication, I had to ring them nearly 40 times to get an answer.

“I’ve been living surrounded by human waste and it’s taken over a week to sort it. However you look at it, that’s just not good enough.”

A Cardiff council spokesperson said: “A plumber from our Responsive Repairs Unit attended the property within a few hours of the tenant’s out of hours emergency call on Monday June 6 and carried out works late into the evening to clear the toilet blockage, clean up waste water and disinfect the bathroom.

“Mr Escott requested that the damaged floor coverings were not removed at that time.

“Further cleaning took place to completion on Wednesday June 8 and Thursday June 9 once Mr Escott confirmed the carpets could be removed.

“A move to an alternative property was offered, but that was initially declined by Mr Escott. At this point he requested that a tenancy officer visit to inspect the property and works carried out so far.

“An inspection took place on Monday June 13 when it was agreed that carpets and flooring should be replaced, and a replacement toilet and pipework boxing be installed.

“Works have already started and are due to complete by the end of this week, subject to the availability of parts and fittings and no further repair issues arising.

“Our tenancy management team has been in close contact with Mr Escott throughout this time, ensuring he has been kept aware of all the measures being taken to resolve the matter.”

(with report from Daily Sun)

Saxon is a prolific writer with passion for the unusual. I believe the bizarre world is always exciting so keeping you up to date with such stories is my pleasure
Previous Watch as 64-Year-Old Indian Man Jugs Football Like A Pro
Next Man confronts, slaps girlfriend in a hotel room where she allegedly lodged with his friend (video)