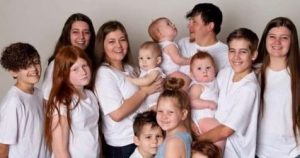 She is a famous TikToker and she has 12 children, something not commonly associated with the part of the world where she resides. Well, now she says “I am done”. But she might have a problem with that decision because she says her husband doesn’t agree with her on that.

A mum from Arkansas City, Kansas in the US has revealed that she was done having children after giving birth to 12 children in the last 17 years.

She then had three more children from the ages of 17 to 19, then another four in her 20s, then she welcomed triplets at 30.

Then two years later, when she was 32 years old, Britni gave birth to one more baby, bringing her total to 12 children and meaning she had been pregnant on and off for almost 17 years of her life.

This TikToker who has over 1.8 million followers now says she’s done having children but her husband doesn’t agree.

‘I think I’m done,’ Britni told Today, adding that husband Chris, 30, would be keen to have even more kids. 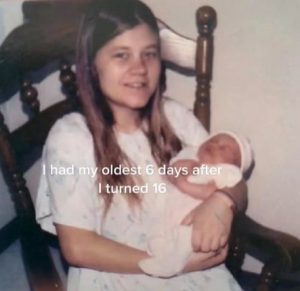 Before meeting Chris in 2014, Britni spent three years raising her children as a single mum. 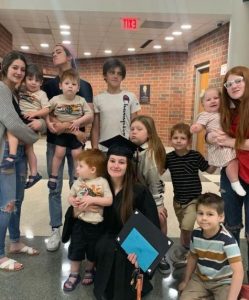 ‘They were all vaginal except the triplets,’ she explained. ‘With them I had a C-section.’

Britni documents her family life on her TikTok account @ourlargefamilylife, which has more than 1.8 million followers. She told Today that people are fascinated by big families and have questions on everything from groceries to cars.

She says the family eats meals together at a custom-made 12-seat table that Chris built. Each child also shares a room with another sibling.

When they’re all together, they travel in a 15-seat Ford Transit that they bought after the birth of their triplets.

The mum says that the children take up to two gallons of milk a day, which costs them roughly $200 a month.

Britni says she has been accused of everything from being on welfare to contributing to overpopulation.

In a recent video she used the caption: ‘I used to care so much about what others thought of me. Don’t let them mean comments get to you. Be someone who spreads positivity!’

She also told Today that people often make assumptions about her large family.

‘I get a lot of questions like, “Are you Catholic? Are you religious?” I’m Pentecostal, but that has nothing to do with why I have so many.’

She added; ‘We are happiest when we’re all together.’

Saxon is a prolific writer with passion for the unusual. I believe the bizarre world is always exciting so keeping you up to date with such stories is my pleasure
Previous Mum saved teenage daughter’s life by fighting off knife-man who stabbed her 22 times in family home
Next Police arrest six cultists who invaded hospital and macheted injured rival to death