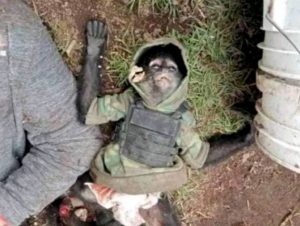 A monkey wearing a custom-made bulletproof was found dead among drug gang members after a deadly cartel shootout.

The monkey was lying on the body of a young man believed to be its boss. Both the monkey and the boss in his 20s were shot dead in the cartel war.

The death of the young man found shot to death with the monkey resting on his chest is linked to one of Mexico’s most known crime organizations, La Familia Michoacana.

The police were shocked to discover the unusual and gruesome sight of thedead monkey which occurred after a shootout with cartel members in the central Mexican town of Texcaltitlan, about 60 miles southwest of Mexico City.

The small spider monkey had his arms outstretched as if he were hugging his master, who was carrying him by the shoulders when he was discovered.

The monkey also had on a ballistic vest, a hooded jacket in khaki, and a diaper. 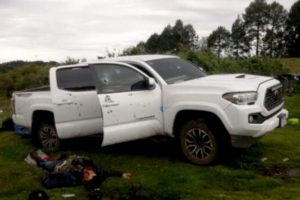 An altercation between troops of the Mexican National Guard and members of the Attorney General’s Office of the Mexican State of Michoacan led to the shooting, reports Fox3Now.

At the scene of the shootout, ten individuals were murdered, one died later in the hospital, and ten more were apprehended.

A kid under the age of 15 is among those detained, along with five men and three women.

A second adult was taken to the hospital, but no further information has been released.

Police, on the other hand, have now confirmed that the photos are real. 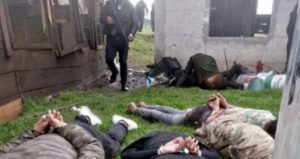 After a raid on Tuesday, June 14, the monkey’s owner was supposedly a member of La Familia Michoacána’s regional security unit, which was headed by “El Gorilla,” and he escaped.

An autopsy will be carried out by specialists from the UAEMex’s Faculty of Veterinary Medicine and Zootechnics (FVMZ), according to the newspaper.

As a result of this investigation, officials will look into whether the protected spider monkey was illegally transported by the narcotics group.

Saxon is a prolific writer with passion for the unusual. I believe the bizarre world is always exciting so keeping you up to date with such stories is my pleasure
Previous Mother gunned down while holding baby
Next Woman removes her underwear and sits on man’s face ‘for £100 bet’ in packed beer garden