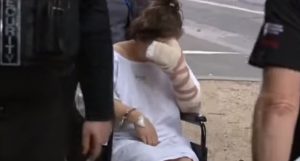 A mother allegedly cut off her boyfriend’s genitals after stabbing him and his friend to death.

Jasmine Everleigh, 44, is accused of murdering Samir Esbeck, 59, and Sarkis Abboud, 61, in a Brunswick apartment in Melbourne, Australia, at 5:20am on Thursday, May 5.

Everleigh was in a relationship with Mr. Esbeck for 10 years before she allegedly killed him in a brutal knife attack.

Esbeck was said to have been stabbed and had his genitals severed before he died at the scene while his friend, Mr. Abboud, died while being rushed to hospital.

Everleigh was arrested on a nearby tram, taken to hospital, and later charged with two counts of murder.

Security footage from several stores filmed a shirtless Everleigh walking down the street with a shirt wrapped around his left hand after the alleged stabbing.

She ran through numerous dark streets and alleys in shoes that were allegedly covered in blood.

Police said Everleigh left a 1.5-kilometre trail of blood along several roads and a children’s playground.

She was arrested on a streetcar in nearby Carlton and taken to the hospital with minor injuries.

Homicide detectives launched an investigation by cordoning off the apartment following the suspected double stabbing.

There were traces of blood on the pavement around the area where the stabbing occurred, but police are not looking for anyone else involved.

The streetcar the woman was arrested on was forensically examined, while officers were also seen combing nearby Breese Street for clues on Thursday.

Acting Deputy Police Commissioner Mick Frewen said there were multiple sites involved in the incident that would be investigated.

(With report from Daily Mail)

Saxon is a prolific writer with passion for the unusual. I believe the bizarre world is always exciting so keeping you up to date with such stories is my pleasure
Previous Surveillance camera captures shocking moment 77-year-old retired soldier shoots and kills his grandson after a scuffle (Video)
Next Man and his new wife arrested for chaining one of his ex-wife’s children and neglecting the other two (video)