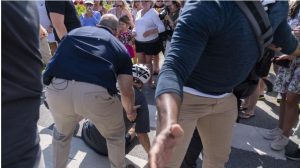 From this angle you would think the worst happened when the president landed on the ground but he’s completely fine.

President Joe Biden fell when he tried to get off his bike at the end of a ride Saturday at Cape Henlopen State Park near his beach home in Delaware, but said he wasn’t hurt.

“I’m good,” he told reporters after U.S. Secret Service Agents quickly helped him up. “I got my foot caught” in the toe cages.

Biden, 79, and first lady Jill Biden were concluding a morning ride when the president decided to pedal over to a crowd of well-wishers standing by the bike trail. As he tried to get off the bike he tumbled and landed on the ground.

The president quickly collected himself and spent several minutes chatting with people who had gathered to watch him bike.

The Bidens marked their 45th wedding anniversary on Friday and they are spending a long weekend at their Rehoboth Beach home.

Saxon is a prolific writer with passion for the unusual. I believe the bizarre world is always exciting so keeping you up to date with such stories is my pleasure
Previous Man and his new wife arrested for chaining one of his ex-wife’s children and neglecting the other two (video)
Next Pest Control Company Will Pay You $2000 to Let it Release 100 Cockroaches Into Your Home