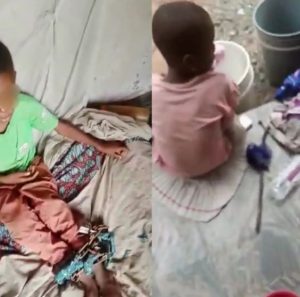 Police in Owerri, Imo state, Southeast Nigeria, has arrested a man and his new wife for abusing three children from his previous marriage in their home located at the World Bank area of the state. The arrest took place Saturday, June 18.

A statement released by the state police command spokesperson, CSP Michael Abattam,  says the parents were arrested after a good samaritan who saw the state children, filmed and shared a video showing how one of the children was chained while the other two were left unattended to. It was also gathered that the children were prevented from going to school.

Abattam stated that in sequel to a report on child Slavery/Abuse received from the  good Samaritan, the Divison Police Officer (DPO) in Incharge of New Owerri Divisional Police Headquarters Owerri, Imo state, swiftly mobilized a team of policemen including the Officer Incharge of Juvenile Welfare Center (JWC ) to the scene at World Bank area.

‘On arrival the police operatives went into the identified house where they found a malnourished child, later identified as Kelechi Nwosu, age 7 years,in an uncompleted security post, his two legs chained and locked with two padlocks. The child was immediately rescued alongside two other children-Destiny Nwosu age 11 years and Chinemerie Nwosu age 9 years all looking unkept and malnourished.

The police spokesperson added that on rescuing the children the police operatives immediately rushed them to a nearby government hospital where they were treated and discharged. However, they were later handed over to a government-recognized Orphanage Home where they will be well taken care of pending when their mother is located.

The police added that the two suspects are presently in police custody undergoing interrogation and they will be charged to court as soon as the investigation is concluded.

Watch the video below

Saxon is a prolific writer with passion for the unusual. I believe the bizarre world is always exciting so keeping you up to date with such stories is my pleasure
Previous Woman allegedly cuts off boyfriend’s genitals after stabbing him and a friend to death
Next Disturbing video shows moment President Biden falls while getting off bike after beach ride near his Delaware home