Home / North America / Woman had her leg ripped off by a shark; her father’s strong fists saved the day

Woman had her leg ripped off by a shark; her father’s strong fists saved the day 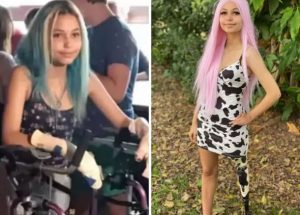 Overcoming shark attack is no child’s play at all. Anyone who survives such attack has a dual challenge of healing physically and mentally because of the trauma that comes with almost getting eaten up by this deadly predator. The strength in jagged jaws of sharks is enough to tear a human being into pieces in a matter of seconds. So when you experience this predator with ruthless killing skills and survive, it then takes a great deal of spirit and determination to heal mentally and lead a normal life again.

This is what 20-year-old Paige Winter has succeeded in doing. She had her leg ripped off by the ruthless predator while playing in the water at Fort Macon beach in North Carolina.

The incident took place in 2019 when Paige, her father, Charlie Winter, and a 7-year-old kid were standing in waist-deep water and the attack suddenly happened.

Paige said the attack was so sudden that she had almost no time to react.

“I leaned backwards to kind of flop backwards onto my back, and then swim backwards and come back up like a mermaid, but once I had gone backwards, I had stepped on something and then the chaos began,” she told LadBible during an interview.

At first, Paige thought her father was playing a prank on her. But soon, she started feeling a sharp pain in her ankle.

Her father took action at that moment of desperation as he stepped in to save her life. He punched the shark five times on the nose to save his teenage daughter.

Charlie Winter was able to react quickly in an emergency as he was a trained firefighter and paramedic.

Eye-witnesses had told local media in 2020 that people began screaming as Paige attempted to crawl from the water. The Atlantic Beach Fire Department described her injuries to local media as “deep lacerations to her leg, pelvis and hand areas”.

She lost a couple of fingers and flesh in her left leg from above the knee.

She recalled the harrowing incident recently.

“I still had the whole leg attached to me, it was really, really awful. You could see bone, you could see teeth marks in the bone,” she told LadBible.

The injuries to her leg were so severe that they needed amputation.

More than three years since the incident, Paige now lives a normal life with the help of her prosthetic leg.

Saxon is a prolific writer with passion for the unusual. I believe the bizarre world is always exciting so keeping you up to date with such stories is my pleasure
Previous Professional scream artist earns a living by screaming in movies and TV series
Next Woman swims to India from Bangladesh to marry boyfriend she met on Facebook, gets arrested after the wedding