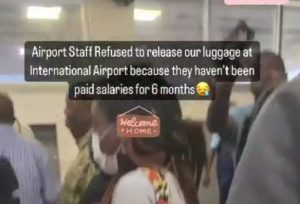 There was pandemonium at the Murtala Muhammed International Airport in Lagos State, Nigeria, as airport staff protested unpaid salaries by seizing passengers’ luggage.

Passengers who witnessed the protest said the airport staff complained that they haven’t been paid for 6 months.

In a video shared online, the passengers are seen standing around the baggage reclaim area at 7am, asking for their luggage, but airport staff asked them to “step back”.

One passenger added that they were told that anyone who films the incident will not get their luggage.

The passengers remained stranded for hours until later in the day when the airport staff allowed them to take their luggage.

Vanko is a cheerful writer whose enthusiasm for unusual stories is inspiring.
Previous Police arrest 14-year-old boy for raping woman in Hollywood (Video)
Next Cop, Wife on Scooter Swallowed By Drain On Waterlogged Road (Video)