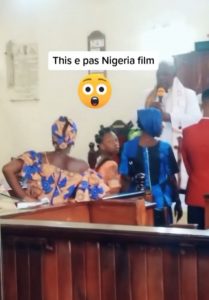 Just like something you see in the movies, a woman was shouting “yes, see the certificate” to prove that the man was already married and some other woman presented the certificate to officiating priests. It just a dramatic moment in Sierra Leone.
A man escaped being mobbed after family members of his wife stormed a church where he was wedding a new wife, to present proof that he was already married.
Family members of his wife were heard shouting during the church service that he’s married, and this led to the wedding being called off by the priests.
The officiating priests took time to explain to the man getting married and congregation resent in the church service that due process had to be followed before the wedding could take place and that they never knew about the fresh document showing the man was already married.
As the video rolled on, the man tried coming out of the church but rushed back after he saw a crowd at the exit.
The incident was said to happened last weekend in Sierra Leone, though the exact city where it happened was not mentioned.
Watch the video below;

Vanko is a cheerful writer whose enthusiasm for unusual stories is inspiring.
Previous Young Irish mum shows off terrifying injuries after allegedly ‘being spiked’ in nightclub
Next Watch: Shocking moment birthday party turns into brutal brawl over e-cigarette (Video)