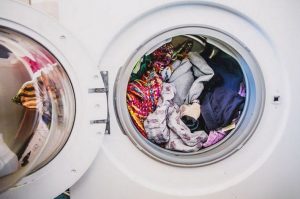 A 20-year-old mum has died after she suffered a fatal electric shock when she put her hand into a washing machine, thinking her load had finished.

Viviane Rodrigues was putting on a wash at her home in Juazeiro, north-east Brazil, last week when the incident occurred.

As she put her hand in the machine it was still running, to retrieve some items of clothing she suffered a massive shock which led to her death, according to investigators.

Viviane’s husband rushed her to the local hospital emergency unit, but sadly the mother of a nine-month-old son was declared dead on arrival.

Following an autopsy, her body was taken to the rural community of Gameleira do Di in the municipality of Campo Formoso, where her family lives, reports Irish Mirror.

She was buried in Gameleira do Di on 16th June. She leaves behind a husband and a baby son.

READ ALSO: Woman ‘marries’ ragdoll her mum made for her and ‘starts family’ with him (Photos)

Saxon is a prolific writer with passion for the unusual. I believe the bizarre world is always exciting so keeping you up to date with such stories is my pleasure
Previous Two men spotted walking naked in broad daylight (photos)
Next Young Irish mum shows off terrifying injuries after allegedly ‘being spiked’ in nightclub