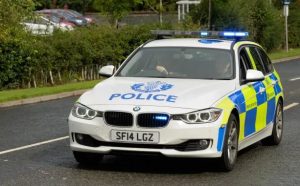 A woman has landed in the hospital needing serious medical attention after she was hit by a police car responding to a 999 call over the weekend.

The incident which took place on last Saturday saw the 23-year-old walking when she was involved in a crash with the marked car.

The crash happened at around 7.25pm on King Street in Aberdeen.

When alarm was raised over the incident, emergency crews raced to the scene to take care of things.

The woman was taken to Aberdeen Royal Infirmary for treatment to her injuries and the injuries were not thought to be life-threatening, reports Scottish Sun.

Police confirmed that they have launched a probe into the incident.

A Police Scotland spokesperson said: “Around 7.25pm on Saturday, 18 June, 2022, a police vehicle responding to an emergency call was involved in a collision with a pedestrian on King Street, Aberdeen.

“The 23-year-old female pedestrian was taken by ambulance to Aberdeen Royal Infirmary.

“Her injuries are not thought to be life-threatening.

“No-one else was hurt.

“Enquiries are ongoing to establish the full circumstances.”

The Police Investigations & Review Commissioner has confirmed they have already launched a probe into the incident.

A spokesperson said: “We are investigating the circumstances surrounding the serious injury of a 23 year-old female in Aberdeen following police contact.

“The matter was referred to the PIRC by Police Scotland and a report will be submitted to the Chief Constable in due course.”

Saxon is a prolific writer with passion for the unusual. I believe the bizarre world is always exciting so keeping you up to date with such stories is my pleasure
Previous Watch: Shocking moment birthday party turns into brutal brawl over e-cigarette (Video)
Next Police arrest 14-year-old boy for raping woman in Hollywood (Video)