Nebraska couple shocked to hear buzzing through walls of their home, later discover 6,000 bees inside 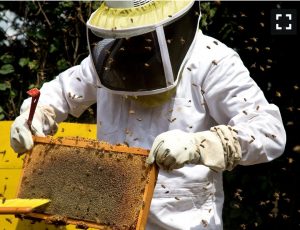 A couple in Omaha, Nebraska, were recently stunned after making a startling discovery in the walls of their home: 6,000 bees.
Thomas and Marylu Gouttierre told The Omaha World-Herald they had been planting bee-friendly flowers on their property but there was no way they ever imagined the pollinators would get into their 100-year-old house.
The bees found their way into the wall through a hole in the mortar of the home’s exterior, but the couple didn’t notice until they saw a swarm outside the windows of their kitchen and second-floor bedroom, the World-Herald reported.
There was a particular point the couple spotted 30 bees in the bedroom.
“If you put your ears to the wall you could hear the buzzing,” Thomas told the World-Herald.
They decided against calling an exterminator because of bees’ importance to the ecosystem.
What they did was to call two members of the Omaha Bee Club, who removed the bees for $600, making a hole in the wall and vacuuming out the bees into a box to move them.
When the couple checked Inside the walls, they discovered three honeycombs measuring roughly two inches thick and nine inches in diameter.
The couple looks back on the unusual incident as a learning experience.
“I think in the long run, it’s made us appreciate all the more the value of bees, and the importance of them to the process of pollination and all the things insects may do to help us eat,” Thomas told the World-Herald.

Saxon is a prolific writer with passion for the unusual. I believe the bizarre world is always exciting so keeping you up to date with such stories is my pleasure
Previous Couple believe they might be half sisters sharing same dad after dating for 2 years
Next Horrified teen wakes up to find body of murdered woman in his bed