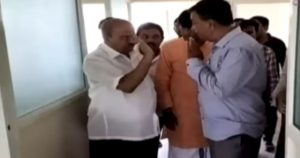 A video going viral online captures the moment a Janata Dal (Secular) leader slapped the principal of a college in Karnataka.

The politician, M Srinivas, was on a visit to a college and reportedly got angry after the principal could not provide a clear explanation about the ongoing development work for a computer lab.

The incident took place in Mandya on June 20 and the video is now going viral on social media. There is an increasing public outrage over the incident with many social media users calling on the teacher to take legal action against the politician.

In the video, Mr Srinivas, the MLA from Mandya, is seen slapping the principal while taking a tour of the renovated Nalwadi Krishna Raja Wediyar ITI college.

Other officials and other local politicians, including a woman, are seen watching the incident in shock.

Many Twitter users have expressed their outrage. “The Principal’s colleagues watching quietly…. shouldn’t they all have walked out of the program in support?” asked a user.

“The principal should file a police complaint. His staff and the staff of other colleges should come out in support,” said another.

Saxon is a prolific writer with passion for the unusual. I believe the bizarre world is always exciting so keeping you up to date with such stories is my pleasure
Previous Viral Video: “Pan-Slapping Contest” Between Two Men Stuns the Internet
Next Dramatic Video Shows Indian Man Beaten By Mob For Kissing His Wife While Bathing In Sacred River