Viral Video: California Woman Terrified to Find Two Bears Get Into Brutal Fight In Her Garage 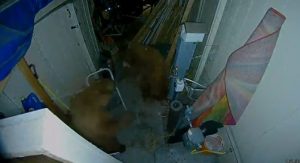 A woman in California was stunned to find two bears engaging in a ferocious fight in her garage.

The two bears were caught on a security camera getting into a tense fight in a woman’s carport.

The clip which has now gone viral showed the two bears scuffling and growling. The two animals are seen running and crashing into each other at the start of the video. Seconds later, they are seen wrestling on the floor, before standing up on their hind legs and growling at each other. 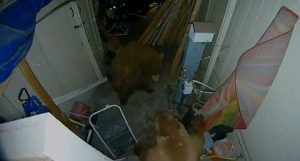 The fight ended as one bear walked away from the other to the bear to the back of the carport.

The viral went viral online with many users sharing opinion on the incident.

While one user wrote, “coolest thing ever!” another said, “Yikes!!! Scary, just the sounds… happy you’re safe and recorded your micro-adventure.” A third user simply called the video “terrifying”.

Speaking to ABC7, Ms Quick said that she woke up to the growling sounds. “I screamed and my dogs started barking and we ran out there to break it up,” she said, adding, “I see bears every single day but we’ve never had them fight before.”

Ms Quick added that this is not the first time she has seen bears in or around her carport.

Saxon is a prolific writer with passion for the unusual. I believe the bizarre world is always exciting so keeping you up to date with such stories is my pleasure
Previous Watch: Terrified Passengers Flee as Airplane Catches Fire At Miami Airport After Landing Gear Collapses (Video)
Next Giant Python Seen Feasting On Rainbow Lorikeet Parrot While Hanging Upside-Down