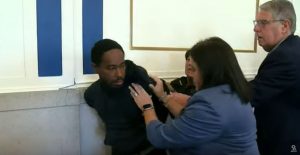 A heart-broken father has attacked his son’s alleged killer in court not minding what officers present at the scene might do to him.

The incident which happened on Thursday, June 23, was captured on camera and the video has already gone viral.

Desean Brown was accused of murdering 29-year-old Nyteisha Lattimore and he was punched by the boy’s father during a procedural hearing. 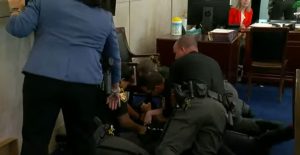 The video shows the boy’s father attacking Brown from the back while he was sitting down and officers eventually dragged him and restrained him from continuing the attack.

The video was posted on Tuesday, June 23 by WCPO 9.

Saxon is a prolific writer with passion for the unusual. I believe the bizarre world is always exciting so keeping you up to date with such stories is my pleasure
Previous Coach dives into pool to save US athlete Anita Alvarez after she fainted during World Championships (photos)
Next Japanese Company Creates Flood-Proof Floating Houses (Video)