Home / Uncategorized / Wife narrates how a lady sent a DM to her husband, telling him he doesn’t deserve her because she is fat (video) 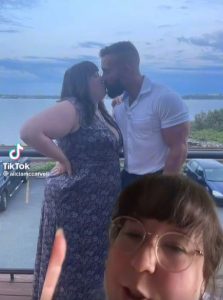 A popular TikTok user has narrated how a lady sent a DM to her husband, telling him he doesn’t deserve her because she is fat.

The TikToker also listed other snide comments she has gotten, adding that her relationship is under public eye because people feel they shouldn’t be together by “beauty standard”.

@Aliciamccaverli stated that people have been forced by society to place value/worth on their body. She further revealed that some people who try to give reasons why they are together, sometimes say she was not fat when they met or he married her because she’s rich.

The TikTok user also said that sometimes, people say her husband is gay or that he fetishes fat women.

Saxon is a prolific writer with passion for the unusual. I believe the bizarre world is always exciting so keeping you up to date with such stories is my pleasure
Previous Austrian man catches drug-resistant strain of STI from Cambodian prostitute as experts claim virus poses ‘major global threat’
Next Man overpowers armed robber trying to rape his wife, grabs his gun