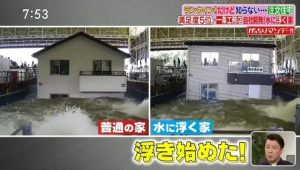 The world may be witnessing one of the most vital solutions to flooding in many countries especially as it has to do with protection of buildings.

A Japanese housing developer Ichijo Komuten has invented a “flood-resistant house” that is waterproof and makes buildings float off the ground during flood.

A Japanese housing developer claims to have come up with a solution that would protect people’s homes from getting flooded and being swept away during flooding. They recently presented their new “flood-resistant house” on a popular Japanese TV show and This innovation has been getting a lot of attention online ever since. 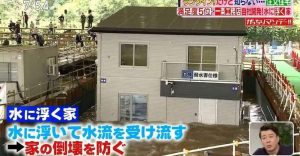 Japan’s TBS TV station recently paid a visit to one of Ichijo’s test sites where the company’s new flood-resistant house was being put through a simulated flood.

Initially when the test began, the building looked just like an ordinary house but by the time water started rising around it, those who watched the test could see the structure leave the ground and eventually float a few inches above it. 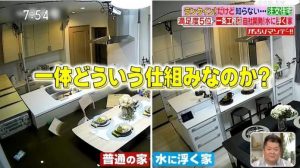 Ichijo’s newest invention features a system that prevents a house form being swept away by flooding. The house is connected to a number of thick iron rods sticking out of the ground with thick cables that ensure it stays in place as the water floods past. When the waters recede, the floating house comes back down in its original position.

The “flood-resistant house” also features special vents that close up in the event of flooding, and the plumbing also has special valves that prevent water from getting into the home. Electrical equipment like air conditioning is positioned on the upper half of the building to ensure that water doesn’t reach it.

According to engineers at Ichijo Komuten, most homes flood when water reaches the window level, but because their flood-resistant house can float up to five meters above ground, water is unlikely to reach the windows and everything else is sealed shut.

Ichijo Komuten is one of Japan’s largest housing developers and prides itself on setting three Guinness records in the last two years, including for the largest factory of prefabricated housing materials and for the most successful custom home company.

Saxon is a prolific writer with passion for the unusual. I believe the bizarre world is always exciting so keeping you up to date with such stories is my pleasure
Previous Watch dramatic video as father attacks his son’s accused murderer in court
Next ‘I have lost nine children through miscarriages – Actress, Sharon Stone