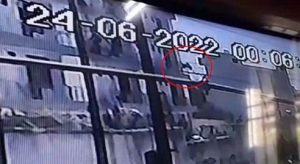 A 30-year-old Indian woman has lost her life after she was allegedly thrown off the fourth-floor balcony of her house by her husband and four others in Uttar Pradesh’s Agra, the police said on Saturday.

Police said the woman identified as Ritika Singh was living in a house in the Tajganj Police Station area with a friend she had allegedly met on Facebook, after having separated from her husband, reports NDTV.

Police have arrested three people, including the woman’s husband, Akash Gautam, and booked them in sections 302 (murder) and 34 (act done by several persons with common intention) of the Indian Penal Code, the police said.

“Preliminary investigations have revealed that a married woman identified as Ritika Singh was living with her friend Vipul Agrawal whom she met on Facebook, in an apartment in Nagla Mewati under Tajganj Police Station limits. The incident took place on Friday at about 11 AM,” Senior Superintendent of Police (SSP), Agra, Sudhir Kumar Singh, said.

Ritika was a resident of Ghaziabad and had married Akash Gautam, a resident of Firozabad, in 2014 and had separated in 2018, the police official said.

“On Friday, Akash Gautam, the husband of Ritika Singh reached the apartment along with two women and two men. There they had an argument with Ritika and Vipul Agrawal and later assaulted both of them, as informed by Vipul Agrawal to police,” the SSP said.

According to the complaint filed by Mr Agrawal, the accused tied his hands and locked him in the bathroom of the flat.

He said the accused tied Ritika’s hands also before throwing her off the balcony of the apartment, police said.

Mr Agrawal escaped by shouting for help from the bathroom window and drawing the attention of the neighbours, the police said.

“A case has been registered against five persons under sections 302 and 34 of the IPC at Tajganj Police Station in Agra. Three people have been arrested, while two others fled,” Superintendent of Police (SP City) Vikas Kumar told PTI.

“We will also recreate the crime scene, and if needed take help from the Forensic Science Laboratory (FSL),” said Sudhir Singh.

Saxon is a prolific writer with passion for the unusual. I believe the bizarre world is always exciting so keeping you up to date with such stories is my pleasure
Previous Viral Video: Mother Elephant Saves Calf From Drowning In The River
Next Woman Dies As Tree Falls On Her Car While Driving In Chennai