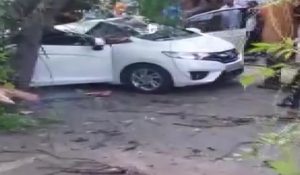 A woman has died in Chennai, India, after a tree fell on her car on Friday evening. The incident took place in KK Nagar area of the city.

Police say the 57-year-old woman was returning from her office when the tree suddenly fell on her car. She died on the spot, while two others were injured.

Those that got injured were taken to the hospital where they were admitted.

Chennai Police registered a case and the investigation is underway.

Chennai has witnessed heavy rainfall for the past few days. Some areas in the city received record rain.

Meanwhile, the meteorological department predicted that Chennai will continue to witness light to moderate rain for the next few days.

Saxon is a prolific writer with passion for the unusual. I believe the bizarre world is always exciting so keeping you up to date with such stories is my pleasure
Previous On Camera, Agra Woman Thrashed By Husband, Hands Tied, Flung Off Building
Next Indian Man Celebrates Pet Dog’s Birthday With 100Kg Cake And 4,000 Guests