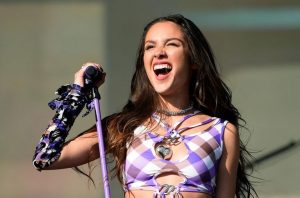 Olivia Rodrigo got an entire crowd to sing “F*ck You” to the Supreme Court on Saturday June 25, just two days after the Court released the Dobbs decision ending Roe v. Wade.

The singer who was just one of a handful of artists who brought abortion rights to the Glastonbury stage over the weekend, brought out Lily Allen on stage to perform her hit song “F–k you.”

“So many women and so many girls are going to die because of this.

“I’m devastated and terrified. I wanted to dedicate this next song to the five members of the Supreme Court who have showed us that at the end of the day, they truly don’t give a s–t about freedom.

“The song is for the justices: Samuel Alito, Clarence Thomas, Neil Gorsuch, Amy Coney Barrett, Brett Kavanaugh. We hate you! We hate you.”

The pair then performed the British singer’s 2009 hit, which includes the lyrics, “F–k you, f–k you very, very much / ’Cause we hate what you do / And we hate your whole crew.”

“This is actually my first Glastonbury and I’m sharing this stage with Lily, this is the biggest dream come true ever.

“But I’m also equally as heartbroken about what happened in America yesterday.”

The musical protests at Glastonbury started on Friday, when Phoebe Bridgers stopped her performance at the festival to send a message to SCOTUS. “I’m having like the shittiest day,” she said in between songs.

“Who wants to say ‘Fuck the Supreme Court’ on three?” After leading the chant, Bridgers called the SCOTUS judges who voted to overturn Roe v. Wade “irrelivant, old motherfuckers trying to tell us what to do with our fucking bodies.” Bridgers publicly spoke about her decision to have an abortion when the Dobbs decision draft was initially leaked in May. “I had an abortion in October of last year while I was on tour. I went to planned parenthood where they gave me the abortion pill. It was easy,” she tweeted at the time. “Everyone deserves that kind of access.”

Headliner Billie Eilish later added her voice to the chorus of women protesting the decision at the festival. “Today is a very dark day for women in America,” she told the crowd during her Saturday night set, as she introduced “Your Power,” a song about “the concept of power and how we need to always remember not to abuse it.”

Bridgers, Eilish, and Rodrigo are just a few of the celebrities who have spoken out against the Supreme Court’s decision dismantling Roe v. Wade. Lizzo announced on Saturday that she had pledged $500,000 of money made from her upcoming tour to Planned Parenthood, and that Live Nation had agreed to match the donation.

Saxon is a prolific writer with passion for the unusual. I believe the bizarre world is always exciting so keeping you up to date with such stories is my pleasure
Previous How 7-year-old boy broke into house, cooked rice, ate all the meat in pot, drank milk then stole two phones and $6
Next “They judge you, they judge Christ” – Wearing crown of thorns as ‘blood’ drips down his face Kendrick Lamar makes powerful plea for women’s rights (video)