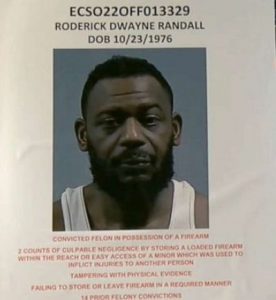 A 45-year-old man has been arrested after his 8-year-old son found his loaded gun in a Florida motel room and shot two girls with it, killing one and wounding the other.

The shooting unfolded Saturday night, June 25, in Pensacola. The victims are a 1-year-old who died and her 2-year-old sister who is injured, reports Daily Mail.

Investigators alleged the father attempted to cover up the incident by removing the gun and suspected drugs from the room before sheriff’s deputies were called to the scene.

The boy’s father, Roderick Dwayne Randall, was arrested on charges of possession of a firearm by a convicted felon, tampering with evidence, culpable negligence and failure to safely store a firearm. 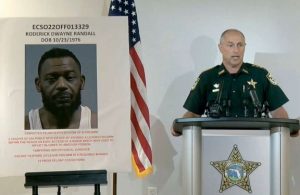 The girl who was killed and her sister are the daughters of Randall’s girlfriend, who was asleep in the motel room when the shooting occurred, Escambia County Sheriff Chip Simmons said at a news conference.

Simmons said: “Roderick leaves the hotel, but leaves his firearm in a closet [in] apparently what he thought was a safe holster.”

Simmons said Randall’s son knew where his father had hidden the gun.

“He pulls the gun from the holster, starts playing with it and fires a round into the 1-year-old toddler, ultimately killing the 1-year-old,” Simmons said.

He said the bullet went through the toddler and hit her sister. A third child in the room, the twin of the injured girl, was not injured, Simmons said.

Relatives of the dead girl identified her as Kacey Bass.

Kacey’s mother was not charged in the incident.

Saxon is a prolific writer with passion for the unusual. I believe the bizarre world is always exciting so keeping you up to date with such stories is my pleasure
Previous Indian Hindu tailor beheaded on camera for going online to back a politician who made controversial remarks about Prophet Mohammed
Next Security nabs women attempting to sneak turtles, lizards and 20 snakes onto plane