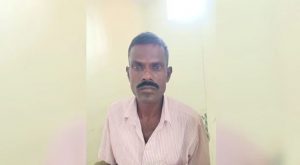 Police in Tamil Nadu, India, have arrested a 59-year-old man for throwing acid on his wife after suspecting her of having an illicit affair.

The suspect identified as Vellu, from Vellore’s Kondathur village, was arrested on Wednesday, June 29.

According to report, Velu and his wife have been married for twelve years and have two children aged 10-year-old and seven-year-old together.

However, the two have been living separately for the past six years due to a difference in opinions.

A week ago, Velu had approached his wife to reconcile with her but the meeting turned ugly as he began to suspect that she was having an affair with another man.

Since then, Velu had been picking fights with his wife and on Wednesday, he threw acid at her.

His wife immediately fell to the ground from the burns and began crying for help. Neighbours who heard the commotion rushed her to a hospital nearby.

The Veppankuppam Police arrested Velu based on her complaint. Officials said further investigations are underway.

Saxon is a prolific writer with passion for the unusual. I believe the bizarre world is always exciting so keeping you up to date with such stories is my pleasure
Previous Brooklyn Mum, 36, and son, 17 arrested for murder a year after her seven-year-old daughter was found tortured, sexually assaulted and beaten to death
Next Woman fatally shot while pushing her 3-month old baby in stroller in NYC’s Upper East Side