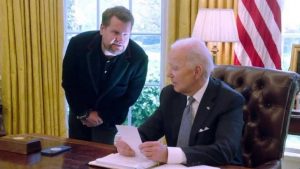 US based British comedian/TV host, James Corden went to the White House as part of a segment for his tv show ‘The Late Late Show’ and posed as president Joe Biden’s personal assistant.

As part of The Late Late Show’s segment, “Take a Break,” Corden headed to Washington D.C., to the seat of political power, to help out with random jobs in the White House.

This included working in the Presidential kitchen, fielding reporters’ questions as a temporary Press Secretary, and even helping President Joe Biden as his personal assistant inside the Oval Office.

While Corden joked around, the president played along.

As his assistant, Corden snuck in a framed photo of himself and Harry Styles from an old “Carpool Karaoke” segment and placed it among the many presidential portraits — inadvertently covering up a photo of President Harry Truman.

Biden also gave Corden a tour of the Oval Office and its plenty memorabilia – including a chunk of moon rock inside a protective display case.

“You want to put it up on ebay, I reckon you would get a lot, we could do that no problem,” Corden joked. “A lot of this stuff is probably worth a lot of money.”

“You are getting me mixed up with the last president,” Biden joked.

The segment also featured former White House Press Secretary Jen Psaki, who resigned from the post in May.

Watch the videos below…

James is lending a hand at the @WhiteHouse! #LateLateLondon

"What the hell is The Late Late Show?" –the leader of the free world pic.twitter.com/XMhkjkSIaj

Okay, we know how President @JoeBiden feels about the CDC and the economy, but how does he feel about @onedirection getting back together? #LateLateLondon pic.twitter.com/lCXKRr8HQw

Saxon is a prolific writer with passion for the unusual. I believe the bizarre world is always exciting so keeping you up to date with such stories is my pleasure
Previous R.Kelly to get sexual disorder therapy and have no contact with minors upon being released
Next Chinese father breaks down in tears after tutoring son daily for 1 year and he scored 6/100 on math exam (photos)