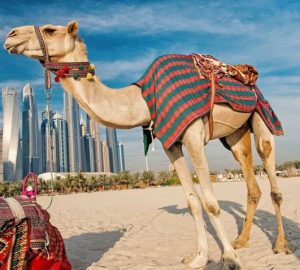 A horrifying report has emerged claiming that social media influencers are reportedly being paid to let wealthy men and camels poo on them.

Many high-profile influencers have been paid exorbitant amounts of money in the UAE to engage in the trend known as the “Dubai Porta Potty”.

The influencers are reportedly given free flights to Dubai and exclusive treatment and in exchange they are made to endure all manner of dehumanising activities, like being urinated on or eating human or camel poo, Daily Star reports.

One social media user claimed a friend of theirs had been summoned to a “Porta Potty” party at a secluded mansion while she was in the UAE and made to do all manner of horrific things in exchange for 50k.

They claimed: “The whole place was empty except for buckets and sex toys.

“The men came in and the girls were instructed to strip. She said she watched in horror as a German man walked over to a bucket and took a s*** before he hand-fed it to a girl.

“I’m just gonna list of all the things she said she did and or witnessed:

“One girl had the contents of the bucket stuffed up her.

“Girls had to slide across the floor on their stomachs, licking up s***.

“There were human centipede actions.”

They went on to claim that their friend was paid 50k for her trouble, however she stoll leaves with the trauma.

They continued: “She went home and took a work sabbatical as well as intense therapy because the sight of anything brown and creamy triggered her.”

Saxon is a prolific writer with passion for the unusual. I believe the bizarre world is always exciting so keeping you up to date with such stories is my pleasure
Previous Ram spotted on a roof (video)
Next Screaming workman seen hanging from crane hundreds of feet in the air