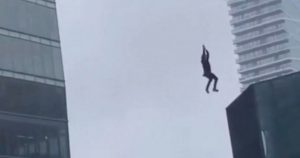 A terrifying has surfaced online showing a building site worker screaming as he dangles hundreds of feet in the air from a crane.

The visibly horrified man who was suspended high among skyscrapers in Toronto, Canada, is seen holding onto what appears to be a very thin piece of rope in one hand.

The footage, which was shot on Tuesday, July 5, before being shared to social media by co-workers, then pans down to show pallets of construction materials underneath him.

Horrified onlookers are audibly scared for the man’s life, with one heard shouting, “Hang on!” to the man, as he flails his legs high above the ground.

At one point in the clip the worker’s hard hat falls to the surface below him as he shakes about in fear in the air.

One onlooker can be heard saying: “Oh my God, how the f*** did this happen?”

The video also shows as his other workers try and help the poor gentleman by lowering him down, witnesses begin to fear he may be crushed by the load.

They can be heard bellowing to the crane driver: “Stop!”.

While the video does not show the man reaching safety at the bottom, site bosses confirmed the worker was lowered safely and suffered no serious injuries.

B roadcaster CBC also reported that no emergency services were called to the scene.

People took to social media to comment on the horror they have seen.

One wrote: “How did this happen… I’ve been in construction for 12 years and can’t figure out how he ended up there.”

As another professional chimed in saying: “As an industrial health & safety manager for a major Canadian construction company, I cannot believe my eyes looking at this. I have a thousand questions.”

While a third wrote: “I have so many questions. This is so scary…”

Building firm PCL Constructors confirmed an “incident took place” when a worker’s hand was “entangled with a tagline after hooking a load”.

It added: “Fortunately, he was safely lowered to the work surface and not seriously injured.”

It has been said that the worker – who was employed by subcontractor Modern Niagara as a rigger – is responsible for ensuring loads of materials are securely fastened before being hoisted by crane operators.

Following the chilling footage, Ontario’s labour ministry is investigating what happened, and sent an inspector to the city centre site.

It said: “It was reported that a worker became entangled with a tag line from a crane after hooking a load, was hoisted off the podium level and sustained injuries.”

PCL also confirmed it is “working with all appropriate authorities” and that an investigation is ongoing.

(With report from Daily Star)

Saxon is a prolific writer with passion for the unusual. I believe the bizarre world is always exciting so keeping you up to date with such stories is my pleasure
Previous Influencers are allegedly being paid for wealthy Dubai men and camels to poo on them
Next Terrifying video shows moment woman, 22, makes 50ft bridge jump that ‘burst’ her spine and left her on wheelchair