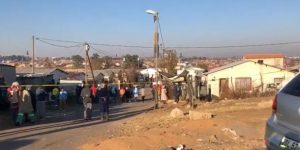 A group of gunmen armed with rifles and 9mm pistols opened fire “randomly” after bursting into a nightspot in Soweto, Johannesburg just after midnight.

At least 14 people died in the shooting and ten others have been left injured, with three people fighting for their lives.

Teenagers are among the casualties.

The attackers fled in a white Toyota Quantum minibus.

Horrifying footage posted online shows the bodies of revellers on the floor.

“They just came in and shot at them randomly.”

Mawela added: “All of a sudden they heard some gunshots, that is when people tried to run out of the tavern.

“We don’t have the full details at the moment of what is the motive, and why they were targeting these people.

“You can see that a high caliber firearm was used and it was shooting randomly.

“You can see that every one of those people were struggling to get out of the tavern.”

Detectives are at the scene.

Mawela said the horror shooting happened around 12.30am this morning.

“Unfortunately, 12 died on the scene and another one died on arrival,” the cop said.

“The number of cartridges found on the scene indicated it was a group of people who shot at the patrons.”

His detectives said the casualties are aged between 19 and 35, according to ENCA.

Four people were also killed in a shooting at a Pietermaritzburg tavern in KwaZulu-Natal last night.

Eight others were rushed to hospital.

Two armed men in a VW Polo stormed into the tavern around 8.30pm before opening fire.

Two people died at the scene after being gunned down and two others died from their injuries in hospital.

It’s understood no arrests have yet been made in the two shootings.

The double horror comes just a fortnight after 21 people died in a “poisoning” at a club in another South African city.

Bodies were found “strewn across tables and chairs” after the tragedy, which happened as students celebrated the end of their exams with a party.

There were “no visible injuries” to the bodies, which were discovered in Enyobeni Tavern in the coastal city of East London.

Early reports suggested the deaths may have been caused by a stampede.

However, the suggestion was quickly ruled out by Unathi Binqose, an Eastern Cape community and safety department official.

“It’s difficult to believe it’s a stampede as there are no visible open wounds to those dead,” he said.

“Parents whose children did not sleep home are gathered here and they want to enter the tavern to look for their loved ones.”

The youngest victim was a 13-year-old girl.

Vanko is a cheerful writer whose enthusiasm for unusual stories is inspiring.
Previous Terrifying video shows moment woman, 22, makes 50ft bridge jump that ‘burst’ her spine and left her on wheelchair
Next Shocking details surface after bruised corpse of woman found raped, beaten and strangled to death in abandoned home