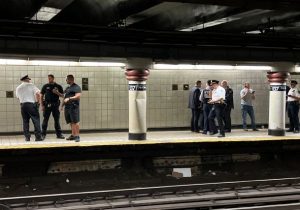 A terrifying daylight stabbing on a New York subway platform has left a teen dead.

The incident took place just after 3pm on Saturday, the 14-year-old boy was stabbed at 137th Street and Broadway in Manhattan.

“Police responded to a crime in progress inside of the 137 Street – City College train station, within the confines of the 30 Precinct/Transit District 3,” a spokesperson for the NYPD told The U.S. Sun.

“Upon arrival, officers observed a 14-year-old male on the northbound 1 line platform with a stab wound to the abdomen.

“EMS responded and transported the aided male to Mount Sinai St. Luke’s, where he was pronounced deceased.

“There are no arrests in regard and the investigation remains ongoing at this time.”

Police believe the boy had gotten into a dispute with someone he knew while on the train.

The incident has caused service delays in both directions.

The identity of the boy is pending as his family is being notified.

“This senseless and tragic incident is awful. We are cooperating with the NYPD investigation that remains in its early stages,” said MTA Transit President Richard Davey in a statement.

Vanko is a cheerful writer whose enthusiasm for unusual stories is inspiring.
Previous Harrowing cries of ’emaciated’ man ‘left tied to a bed’ by his parents revealed after he starved to death in extreme case of neglect
Next Two pupils die, others pass out inside their school bus in Nigeria