Viral Photo Shows Tree Burning From Inside After Lightning Strike 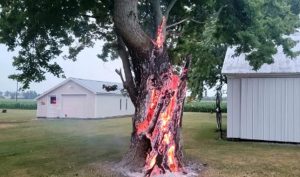 A big tree in Ohio, the United States, has been set ablaze by Lightning from this week’s strong storms, damaging the tree and causing an unsettling appearance as the tree burnt from the inside.

Pictures of the burning tree were been shared by The Ridgeville Township Volunteer Firefighter Department on Facebook on Wednesday.

When firemen from the firefighter department arrived on the scene to extinguish the blazing tree, they were surprised with the difficult task they were confronted with.

“Early this morning, we were called out to a tree on fire. Arrived on scene to find this tree as you see below. Lightning can do some crazy things and we had a tough time getting to every hot spot in this tree trunk,” the fire department said in the post

“Big thanks to Moyer’s Tree Service for coming out this morning to help get this tree cut down for us and the homeowner so we could fully extinguish the fire,” the post further said.

Users’ comments on the post show that they are saddened by the tragedy.

“Such a shame to lose that pretty tree. Wow,” wrote a user.

Another user said, “That might be a gate of the upside down.”

Recently, several videos of lightning strikes were frequently shared on social media from various cities of United States. One of these videos shared on YouTube by ViralHog showed massive bolts of lightning, one of which struck and burnt a tree. People were heard screaming excitedly while watching the scary scene.

According to the post, the incident happened on June 29, in Danvers, Massachusetts, the United States.

Saxon is a prolific writer with passion for the unusual. I believe the bizarre world is always exciting so keeping you up to date with such stories is my pleasure
Previous My mistress beats me for not licking her private parts and sucking her breasts – Teenage housemaid in Nigeria claims
Next Viral Video Shows Hare Fight In The Middle Of A Road, Internet Amused