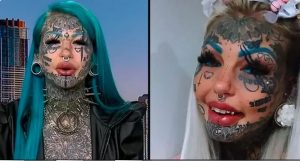 She experienced severe side effect in form of blindness yet she loves the tattoo that caused her current blindness.

An Instagram model who covered 98 percent of her body with tattoos says she has ‘no regrets’ over her unusual appearance, despite later admitting that a botched ‘eyeball tattoo’ left her blind for three weeks.

Amber Luke, 27, from Brisbane, has courted controversy after spending more than $250,000 on tattoos and extreme body modifications, covering around 98 percent of her body in ink. 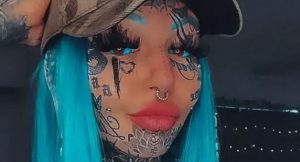 Yet despite the controversy and repeated pleas from fans begging her to stop, the influencer claims the hefty price tag has been ‘worth it’, because she’s now ‘seen how resilient she is’ after putting her body through such extreme stress.

Amber has amassed more than 600 tattoos during her seven-year transformation and shows no signs of slowing down, despite admitting suffering from seizures and temporary blindness following some of her procedures.

In an Instagram post reflecting on the botched eyeball surgery, Amber said the inking left her ‘completely incapable’ of being independent and that she even started crying bright blue tears following the process.

“It’s been five years since I lost my sight for three weeks and was completely incapable of being an independent person,” she wrote.

“The torturous procedure had me endure four syringe injections into each of my eyeballs.

“I cried blue tears for two days after the procedure was performed.”

Amber later commemorated the occasion by getting a tattoo of a woman crying blue tears on her chest.

Speaking in a 2019 interview she elaborated on the process, telling Barcroft TV: “I can’t even begin to describe to you what the feeling was like, the best thing I can give you is once the eyeball was penetrated with the ink, it felt like [the tattoo artist] grabbed 10 shards of glass and rubbed it in my eye.

“That happened four times per eye, that was pretty brutal.

“If your eyeball procedure is done correctly, you’re not supposed to go blind at all.

The model also admitted to getting her tongue split twice, speaking of the ‘excruciating’ pain she suffered after it didn’t take the first time and the surgeon was forced to cut through scar tissue on the second attempt.

Despite claiming the experience almost made her swear off body modifications altogether, she’s since gone back under the knife and spent $70,000 on breast implants, cheek and lip fillers, pointed implants placed in her ears and a Brazilian butt lift.

Speaking to Australian TV, Amber says she got her first tattoo when she was just 16 years old, and that the experience was like a ‘negative energy release’ for her.

“It felt like I’d gone through something so euphoric, it felt peaceful and homely,” she said.

“I still feel it, its pride and joy, it’s amazing.”

Saxon is a prolific writer with passion for the unusual. I believe the bizarre world is always exciting so keeping you up to date with such stories is my pleasure
Previous Viral Video Shows Hare Fight In The Middle Of A Road, Internet Amused
Next Teenager fighting for life with 15 more injured after shooting at football match (Video)