Home / Uncategorized / Watch: Man filmed performing oral s3x on a woman by the side of a busy road (video)

Watch: Man filmed performing oral s3x on a woman by the side of a busy road (video) 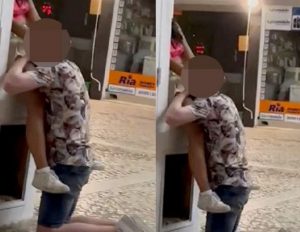 Sounds crazy but if this wasn’t captured on camera it would have been difficult to believe.

Passersby were left shocked after they saw a couple engaging in oral sex on the Algarve strip.

Twitter user, George Fuller, was walking down the Av. Sá Carneiro in Albufeira, Portugal, when he saw a man on his knees, with his head up a woman’s skirt.

He, immediately, began recording the man performing an oral sex act on the woman who had her legs over his shoulders as he moved his head up and down.

It appeared that the woman was sitting on a ledge in front of a mobile phone repair shop as the man knelt down on the pavement below her.

Even as Fuller and his friends approached, the couple didn’t appear to be bothered as they carried on in full view of passersby.

Fuller shared the video on Twitter and it has now gone viral.

Saxon is a prolific writer with passion for the unusual. I believe the bizarre world is always exciting so keeping you up to date with such stories is my pleasure
Previous Teenager fighting for life with 15 more injured after shooting at football match (Video)
Next British woman says she didn’t realize she was a lesbian until her husband suggested it