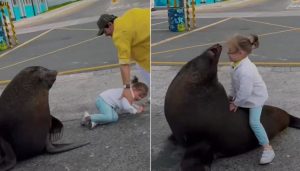 A video has surfaced online showing the moment a sea lion almost attacked a child.

The short clip was shared on Reddit. It shows a little girl mounting a sea lion so that her parents could record her sitting on the animal’s back. However, moments later, the sea lion is seen turning around and almost attacking the kid.

The location of the video or when it was recorded is yet to be known.

The clip ends with the little girl falling on the road. A man, believed to be her father, is also seen rushing to her, picking the kid up and moving her away from the animal.

Since being shared, the video has racked up more than 20,600 upvotes and over 12,000 comments. Internet users slammed the parents for making the small child mount the wild animal.

While one user wrote, “This guy is an idiot, and should be charged with child endangerment,” another said, “I bet you that the parents were upset at the sea lion rather than at their own stupidity.” A third added, “I do feel bad for the kid, you can tell the parents are content hungry, especially when the one just stands there to keep recording.” “How f******* stupid can you be as a parent to let your kid anywhere near a sea lion,” commented fourth.

Saxon is a prolific writer with passion for the unusual. I believe the bizarre world is always exciting so keeping you up to date with such stories is my pleasure
Previous Video of Monkeys using Social Media Stuns Internet
Next Caught On Camera, Tragedy As Indian Man, 2 Children Are Swept Away On Oman Beach (Video)