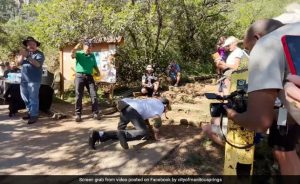 A man in the US state of Colorado has broken an unusual record by pushing a peanut up a mountain with his nose.

53-year-old Bob Salem from Colorado also made history by becoming the first person in the 21st Century to push a peanut up Pikes Peak with a contraption taped to his nose.

Speaking about his history-making feat, Mr Salem said, “There is no city like Manitou Springs. I am excited to be the one to bring around this bit of history to celebrate Manitou Springs’ 150th Celebration. I hope everyone takes the time to visit and indulge in the rich history the Pikes Peak area represents. You won’t want to leave.”

According to 9News, the previous record was eight days. A man had pushed a peanut up Pikes Peak with his nose 93 years ago. Since then, the challenge has been tackled a few times but never in the 21st Century.

Saxon is a prolific writer with passion for the unusual. I believe the bizarre world is always exciting so keeping you up to date with such stories is my pleasure
Previous Terrifying Video Shows School Bus Topple Over In Floodwater In India
Next University students performed naked dance ritual in front of women (video)