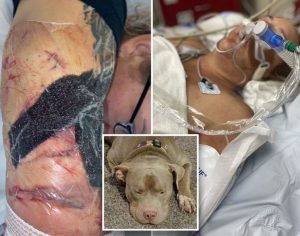 A woman was almost eaten alive by her pet pitbull when it attacked her and devoured half her arm.

Tya Lucas, 41, was at home in Lewisville, Texas, introducing her new puppy, Roo, to her friend Peter, 33, on May 16 when her pit bull, Hercules, attacked her.

Tya Lucas said: “The puppy went to jump on the couch so I went to pick the puppy up — and my friend told him to get down.” 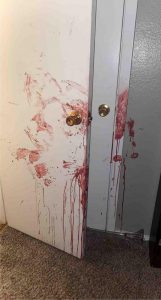 That’s when Hercules lunged at Peter and sunk his teeth into his neck.

“The pit bull jumped on my friend’s neck and he started bleeding. I was like ‘What the f–k?!’ He was latched onto the back of his neck,” she said.

Tya told Kennedy News she sprang into action and pried the pit bull off her friend and shoved him into the safety of the bathroom.

That’s when Hercules turned his aggression on Tya.

She said: “He must have smelled [Peter’s] blood all over me and started attacking me. I don’t remember a lot of it. I remember looking down and my flesh being torn off my arm.

“I don’t remember the feeling of it, I remember screaming, ‘Hercules, it’s me.’ ” 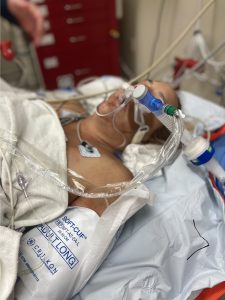 The dog tore off two-thirds of Tya’s right arm, ate her bicep and sank its teeth into her leg and foot.

She was screaming, “Help me, I’m dying” when her daughter, Tana, 20, and her husband, Harley, 21, rushed into the living room.

“[Tana] saw the dog was trying to kill me. She reached out her hand to me and I tried to grab it but I missed her by inches,” Tya said. “It grabbed onto my leg and dragged me further away. Her husband walked in and he beat the dog off of me. I don’t remember that part. I don’t know if I was passing out.”

Harley stepped in to wrestle the canine away from Tya and carry her outside, when officer Jordan Potter arrived on the scene in response to Tana’s frantic 911 call.

Lewisville Police Department Public Information Coordinator Matt Martucci told The Post: “Officer Potter is very proud of the fact that he was able to save the woman’s life — but if you ask him it was all just in the line of duty to serve and protect the residents of Lewisville. This was a pretty traumatic situation for this family [but his] actions kept it from being a deadly situation and provided a little comfort for the family.” 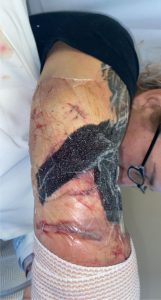 Tya recounted: “I don’t know how many times he bit me. I think it went on for about five minutes. I thought I was going to die. I fought somehow to stay alive. A good two-thirds of my arm was torn off. He ate my entire bicep.

“The police said if I’d passed out in the house, he would have eaten me from my insides.

“They said they’d seen stabbings, gunshot wounds and they’ve never seen what they saw that day.

“They put a tourniquet on my arm and the doctor said if he hadn’t been there to do that at that exact moment, then I wouldn’t have made it until the ambulance got there.”

Tya was rushed to the hospital, where she was put on a ventilator for two days. She stayed in the hospital for 19 days, where she had hundreds of stitches across her arm, leg and foot and five operations to cut the dead skin away. 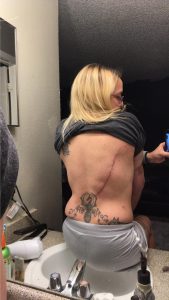 Tana and Harley had found Hercules abandoned at the side of the road, covered in cigarette burns, two years earlier.

But Tya says Hercules had never shown signs of aggression before and even slept in bed with her the night before the attack.

Animal Control Officer Amanda Navarro was called to the scene and used a tether pole to secure the dog despite his consistent thrashing.

Tya and Tana surrendered Hercules to police at the scene and he was put down soon after.

She said: “He was never aggressive before. I heard him bark one time when something made him jump. I’ve no idea why this happened. He slept in bed with us. I don’t know what triggered him.

“I never had a problem with dogs, but now I’m terrified of them. I can’t go near dogs. If there’s one off a leash, I panic [like] I’m about to have an anxiety attack.”