A new exhibition at the prestigious Natural History Museum in Vienna is displaying human remains that date back to the 18th century – including deformed organs and burnt bodies.

Vienna’s prestigious Natural History Museum has recently renovated its vast collection of human medical remains that date as far back as two centuries ago.

Yes, you read correctly, human bodies that were walking around in the 18th century have been protected from wriggling maggots and can now be found behind shiny cabinets in Austria’s capital. 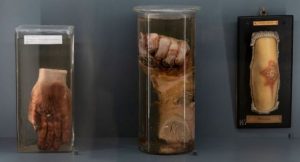 For 15 euros a pop, you can enjoy the likes of a bloated liver, an infant with lacerated skin and a young girl’s deformed skeleton. These are among the 50,000 human body parts that belong to the collection.

While such a display would be banned in some countries, human remains have been on display in Europe since the 16th century when Egyptian mummies were first exhibited.

The parts were initially intended to help train medical students in 1796, however their existence and purpose pose a more complex question today.

The gruesome gallery has sparked debates about whether the display offers anything more beneficial to society than appealing to those darker crevices of people’s curiosity. Or whether that, in itself, is enough justification. 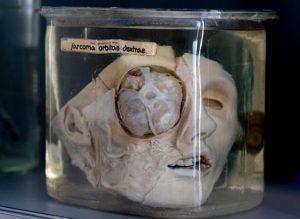 The curator Eduard Winter said that he hopes the exhibition can help people understand more about the effects of disease and illness on the body. Visitors can peer at internal organs, burn injuries and blood vessels.

It is argued that this, in turn, may help people to make healthier life choices and is therefore in the public interest. For example, in the case where a 30kg liver shows the effects of excessive alcohol consumption on the body.

Supporters also argue that by banning photographs and having detailed biological explanations, the exhibition is more informative than voyeuristic.

Along with a general awareness about decolonising museums, the anatomical gallery has also raised concerns about how and where the body parts have been acquired.

Another facet of society’s love for the more gruesome parts of history are the abandoned asylums that have become tourist traps.

Built in 1784, it has housed gruesome abnormalities, including jars full of deformed foetuses, and sickening wax models of untreated STDs. Either way, there’s enough nightmare fuel in this place to last you until next Halloween.

Saxon is a prolific writer with passion for the unusual. I believe the bizarre world is always exciting so keeping you up to date with such stories is my pleasure
Previous Woman’s body cut out of crocodile’s stomach few moments after it swallowed her whole (Photos)
Next Dad killed himself after being ‘ambushed’ with disciplinary meeting at work