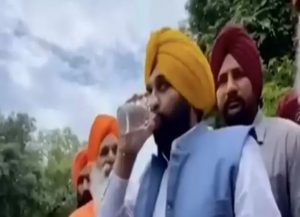 A politician in India was taken to the hospital after drinking water from a sacred river in an attempt to show it was clean and safe, according to local reports.

Bhagwant Mann, chief minister of the Punjab region, was filmed drinking a whole glass of water from the Kali Bein, a rivulet that is considered holy to Sikhs, according to The Indian Express.

Mann’s Aam Admi Party tweeted the footage on Sunday, writing in Punjabi about the cleaning project and the rivulet’s holy associations.

Officials denied any connection between the hospital visit and the water, saying it was a routine checkup, according to Indian TV network NDTV.

But, citing unnamed sources, the Express reported that the illness was caused by the water. Mann developed a severe stomachache and had to be airlifted for tests at the hospital, the outlet reported.

Mann was discharged late on Wednesday and, according to a tweet by journalist Gagandeep Singh, was scheduled for a meeting with officals on Thursday.

The Kali Bein is considered holy because it is believed that the founder of Sikhism, Guru Nanak, bathed in its water and achieved englightenment there.

In 2000, the environmentalist Baba Balbir Singh Seechewal led a campaign to see the highly-polluted waterway cleaned up, The Indian Express reported.

Vanko is a cheerful writer whose enthusiasm for unusual stories is inspiring.
Previous Man’s body cut out from inside giant 13ft crocodile’s stomach after being eaten (Video)
Next Man captured on video begging his wife’s sister for s3x before attempting to force her to sleep with him (watch video)