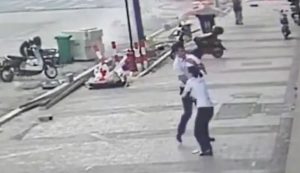 A man from China has become an internet sensation following a heroic stunt he pulled to save the life of a toddler.

The incident was captured in a hair-raising video which has since gone viral.

The man is being hailed as a “hero” for catching a falling two-year-old girl who had tumbled out of the window of her fifth-floor flat.

The incident took place in Tongxiang in Zhejiang province last Tuesday. Footage of the heroic rescue has been shared on Twitter by China’s Foreign Ministry spokesperson Zhao Lijian. “Heroes among us,” the government official wrote while sharing the short clip.

The video shows the man running towards a building with a woman while speaking on a phone. Within seconds, he is seen throwing his phone on the ground and extending his hands upwards to catch the falling girl. The clip captured the moment the man caught the girl before she hit the pavement.

After the video was, it has accumulated more than 139,000 likes. “Real heroes exist in world not just in movies,” wrote one user. “Legendary catch! Give those two people a medal,” added another. “He was talking on the phone and he threw it and just caught the baby. Amazing presence of mind and style. It’s nearly impossible to do this. He is real life hero, not reel life,” wrote third.

According to South China Morning Post(SCMP), the man, identified as 31-year-old Shen Dong, heard a loud bang caused by the two-year-old girl landing on the steel roofing on the first-floor terrace of a housing complex after falling four stories out the window. The little girl then slipped from the edge of the terrace but thankfully Mr Dong caught the girl before she landed on the pavement.

The kid was taken to the hospital following the incident. As per SCMP, she injured her legs and lungs but she is now in stable condition.

“To be honest, I cannot remember the details. I cannot remember if my arms hurt or anything. It was just instinct to reach out to her,” Mr Dong said as per the outlet. He also added that the child survived because the terrace she fell onto included steel roofing material, which softened the fall.

Saxon is a prolific writer with passion for the unusual. I believe the bizarre world is always exciting so keeping you up to date with such stories is my pleasure
Previous Watch: Man Carries Old Parents On Shoulders For Kanwar Yatra annual pilgrimage, Internet Praises Him
Next Teenage girl sleepwalks through open window, falls five storeys onto street