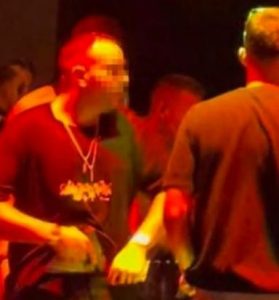 There was pandemonium after a fight broke out at a popular beach club on the Costa Del Sol, Spain, where firearms and knives were brandished, with one of the group opening fire on the crowded dancefloor.

A viral video shows the horror moment a man identified as the gunman who allegedly shot four people including an Irishman at a Costa del Sol club pulls a gun from his trousers.

Detectives have yet to comment on the chilling photo, showing the man in shorts and a dark T-shirt next to another identically-dressed person who is seen in video footage taking his shirt off seconds later to prepare for a fight. 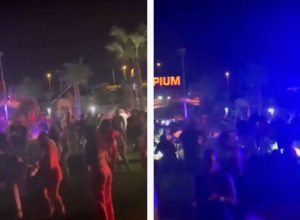 At least five people, including the alleged gunman, were injured in the shooting in the early hours of Monday.

The fight is believed to have involved two groups in a VIP area of the Opium Beach Club in Marbella, Spain at roughly 1.10am. 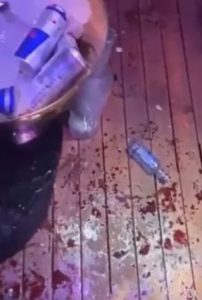 Brits have told how they were left fearing for their lives after a gun and knife fight broke out at the beach club.

According to local media reports, a fight broke out where firearms and knives were brandished, with one of the group opening fire in the crowded club.

A Dutchman, suspected of shooting four people including an unnamed Irishman and a Moroccan woman who was also rushed to intensive care, is currently being quizzed by police.

He’s due to appear in court after being released from Marbella’s Costa del Sol Hospital yesterday lunchtime.

Saxon is a prolific writer with passion for the unusual. I believe the bizarre world is always exciting so keeping you up to date with such stories is my pleasure
Previous Gang beat, rob and drag naked tourist to pub wrongly calling him a paedophile
Next Trans inmate who got two women pregnant is moved to vulnerable unit in men’s prison