Home / Europe / ‘Black Alien’ Says Can’t Get Job Due To Extreme Tattoos, Asks To Be Treated Like A Normal Guy

‘Black Alien’ Says Can’t Get Job Due To Extreme Tattoos, Asks To Be Treated Like A Normal Guy 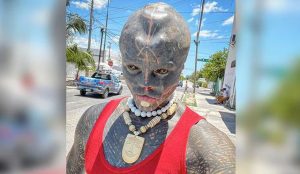 A man who is transforming himself into a “black alien”, has said that he can’t find a job as people “judge him”.

Anthony Loffredo who is from France, has undergone extreme body modifications, such as split tongue to create a forked effect, and is covered with tattoos from head to toe – eyeballs included. Mr Loffredo considers himself a “project and posts about his body modifications on his Instagram handle by the same name.

The Frenchman has also has had two fingers amputated to make his left hand resemble a claw.

Mr Loffredo recently appeared on a podcast Club 113 where he admitted that he gets a lot of “negative” reactions due to his unique looks. “There are people who, when they see me, shout and run. I am human but people think I am just crazy,” he was quoted as saying by Independent-affiliated publication.

“I can’t find a job, there’s lots of negative stuff. It could be positive because you feel better, but you have to know there’s also a dark side,” he further said.

Mr Loffredo said he is aware of the fact that his appearance might startle people, so he tries to make people comfortable by “moving to side” while crossing people.

“It’s a fight everyday, because everyday you find new people who don’t understand, who want to judge. It’s life, not everyone understands everything. Like me, I don’t understand lots of things about lots of people,” he explained.

The 34-year-old insisted he is simply a “normal guy” and wants to be treated like that.

He has amassed 1.2 million followers on Instagram and a lot of people take keen interest in his body modifications.

Saxon is a prolific writer with passion for the unusual. I believe the bizarre world is always exciting so keeping you up to date with such stories is my pleasure
Previous Teenage girl sleepwalks through open window, falls five storeys onto street
Next On Camera: Narrow Escape For Biker Who Goes Under Bus