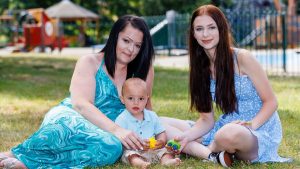 A 38-year-old mum has become one of Britain’s youngest grandmas after her daughter fell pregnant at 14-years-old.

Haley Tricker, from Ipswich, Suffolk, says she loves being a ‘glam-ma’ and is able to keep up with her little grandson.

She found out she was going to be a granny at 37 when her daughter Ashleigh Hazleton, now 16, broke down and confessed she was pregnant.

After becoming a mum at the age of 18 in 2002 herself, Haley felt her own experiences meant she was able to support her daughter during the tough time, reports Mirror Online.

She helped her through her pregnancy and supported her so that she could go back to school and sit her GCSEs within six weeks of giving birth. 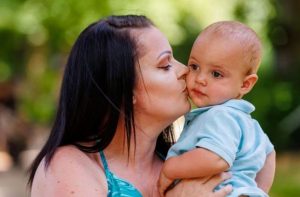 Haley is now helping her daughter by looking after her son while she works toward her career goal of becoming a firefighter.

Haley, who worked as a restaurant manager, took to grandparenting seamlessly – discovering a deeper level of love since the birth of her grandchild Lorenzo, now one – even though her youngest child, Lorenzo’s uncle, is just seven.

Haley said: “I was really shocked to be a gran at that age, but likewise, I don’t think nowadays that it’s really that unusual.

“Being a young nan is great though, I’m definitely a glam-ma!

“We love going to the park and playing on the swings after we’ve dropped my youngest off at school who is seven.”

Before Ashleigh told her family she was pregnant, she appeared to be ill quite regularly and suspected she made have been intolerant to something. 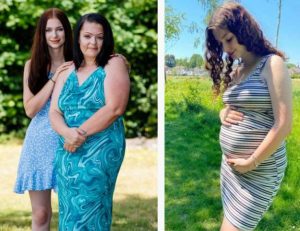 She said: “When Ashleigh told me when she was 24 weeks pregnant and it was a massive shock. She called me downstairs in tears and told me she’d been sexually active.

“My first thought as a mum was did you use protection, they hadn’t, so I sent my eldest to the shop to get a pregnancy test and then rest is history.

“She’d actually been ill sometime before this and we didn’t know why. We thought she may have been allergic to gluten but once we found out it all came together. We contacted the GP and they fit us in for a scan straight away.”

Haley supported her daughter from the second she found out she was pregnant but has revealed some fears she had at this emotional time. 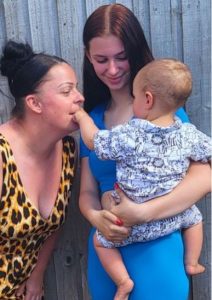 She adds: “It was really unexpected and it was a big shock. The fact is she’s not the first and definitely won’t be the last to be pregnant at 14 so we just got on and dealt with it.

“I was just here to support her not scream and shout. We had a meeting at school straight away and Ashleigh had her heart set on going back finishing off her education so that put my mind at ease.

“We’re a big family already but when we told the other children they were all so excited. My mum once told me having a grandchild is a different kind of love and I’m so certain of that now.

“I genuinely think she’s coping better than most grown adults. Yes, she was a mum at 14 but the way she has dealt with that is amazing.

“I don’t care what anyone says, I’m so proud of Ashleigh and when I think about it all, how’s she handled herself – I definitely tear up.”

When Ashleigh first found out she was pregnant she was reluctant to tell mum Haley.

Ashleigh, now 16, said: “I was in denial for so long before which is why it took so long to tell mum. I kept thinking I was missing my period because I was stressed. Once I found out I told a family member who encouraged me to tell mum. 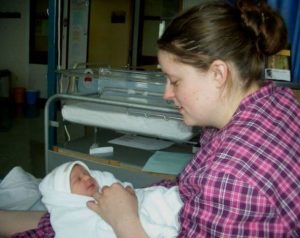 “I was hysterically crying when I found out. My emotions were so high. Most of that time feels like an emotional blur because I just had to get myself through it for Lorenzo.

“I always knew I was going to get my education so going back to school really wasn’t hard. I had such an amazing support network from friends and teachers alike. My mum looked after the baby while I went back to school full time.

“It went like this, I said to myself ‘you’re a student at school and a mum at home’, that approach helped me get through this period of my life.”

Ashleigh is now done with school and she took her little one Lorenzo to prom to celebrate.

She now wants to achieve her aim of becoming a firefighter by going to college to study public services.

Saxon is a prolific writer with passion for the unusual. I believe the bizarre world is always exciting so keeping you up to date with such stories is my pleasure
Previous On Camera: Narrow Escape For Biker Who Goes Under Bus
Next Bizarre new trend shows young people now ‘addicted to getting high on condoms’, see how