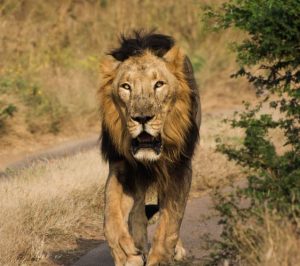 A man was dragged away and eaten by lions in India while he was walking home with his family.

Bhaydesh Paiya, 18, had been walking home with his family in the state of Gujarat’s Amreli district at the time of the attack, Indian news outlet Times Now reported.

The lions, a male and a female, jumped out from the bushes and took hold of the victim from behind.

The lions dragged Paiya towards a nearby mango orchard as his family members began crying for help.

“Our staff reached the spot soon but by that time, the victim had been killed. We could recover only body parts of the victim, suggesting the lions had eaten the victim,” Rajdeepsinh Jhala, deputy conservator of forests told Times Now.

The body has been taken to the town of Khambha for a postmortem.

The lions came from the Gir Forest, a wildlife sanctuary.

“After attempts to bait the two big cats failed, we tranquilized the male lion early on Sunday morning and rescued him. We have got the location of the lioness also and efforts are on to cage her,” Jhala told Times Now.

Saxon is a prolific writer with passion for the unusual. I believe the bizarre world is always exciting so keeping you up to date with such stories is my pleasure
Previous Police arrest student who stabbed her boyfriend to death for allegedly cheating
Next Side piece climbs down five floors from man’s balcony after his main girl showed up unexpectedly (video)