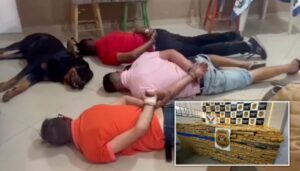 Dogs are referred to as man’s best friend but what this particular dog did has sparked terrible criticisms from the internet as this is not what is expected from a truly ‘friendly dog’.

A dog has been described as the “world’s most useless guard dog” after being spotted lying down beside its owners during a drug raid.

A footage shared online showed cops arresting the three men yesterday July 28, on a ranch in Hortolandia, Sao Paulo state, Brazil. Three suspects were seen lying face-down on the floor with their hands cuffed behind their backs. 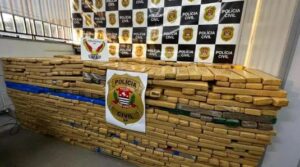 The strange option their massive Rottweiler took was to be compliant with officers and laid down beside them.

Officers seized 1,176 bricks containing 1.1 tonnes of cannabis from the property. Narcotics Police said the drugs was shipped to the house in Hortolandia from Campo Grande, Mato Grosso do Sul state.

It is believed the drugs were to be sold in and around Campinas, Sao Paulo state.

While the men, one of whom owns the house, were taken to the Narcotics Police headquarters in nearby Americana, the dog remained in the property with the woman who owns the land around the house, who police say is not involved in drug trafficking.

It was also revealed that cops will return to the ranch today to check on the Rottweiler and two other dogs to see if animal protection services are needed.

Saxon is a prolific writer with passion for the unusual. I believe the bizarre world is always exciting so keeping you up to date with such stories is my pleasure
Previous Suspected Internet fraudster allegedly murders girlfriend in Nigeria, buries her in his room (video)
Next Bride and groom who died 30 years ago ‘wed’ in lavish ceremony in India