An unemployed man who has been battling to get a job says he is always passed over at interviews because he looks like he is 12-years-old.

Mao Sheng, 27, wants to earn money so he can look after his family but he’s not had any luck so far.

He believes that’s because he looks much younger than he is, so he’s created a TikTok video to vent his frustration.

Thankfully an employer saw the clip after it was shared by a local news outlet in Dongguan, China, and now Mao has finally landed a job.

According to news outlet Oddity Central, many people close to Mao agree that he doesn’t look a day over 10-years-old. 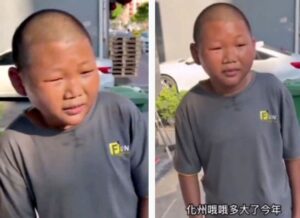 He insists his youthful looks are not a gift as employers never believe his age and suspect he is a government agent, being used to snare companies abusing child labour rules.

He took to TikTok to explain that he needs a job to support his dad who recently had a stroke.

Mao explained that he went with a friend to apply for a job at a factory, but only the accomplice was able to gain employment.

Now he’s become a local celebrity, as the video went viral and soon employers were reaching out to Mao.

Currently, the 27-year-old has accepted a job offer, and he’s hoping to earn enough to look after his father.

Saxon is a prolific writer with passion for the unusual. I believe the bizarre world is always exciting so keeping you up to date with such stories is my pleasure
Previous Man throws his one-year-old son into bush during heavy rainfall, claims the child is possessed by demonic powers
Next British couple found dead in swimming pool in France by neighbours invited to dinner