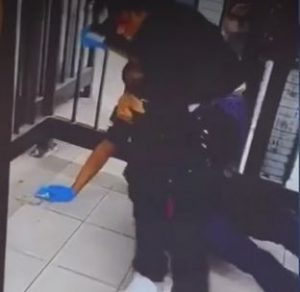 A shocking video has emerged online showing the moment a teenage boy brutally engaged in a brawl with a police officer.

The police union that represents nearly 50,000 active and retired NYPD officers tweeted the shocking video showing a 16-year-old boy brutally beating officers after they confronted him for allegedly jumping the turnstile.

The teen was charged with assault on a police officer and other charges but the Police Benevolent Association says the teen was back on the streets in less than 24 hours.

PBA President Patrick J. Lynch said in a statement to FOX5NY: “If New Yorkers want to know why the chaos in the transit system is not improving more quickly — this is why. The criminals underground know they can get in a brawl, choke a cop and be back out in hours. Cops are putting ourselves on the line to make the subways safer, but we are feeling abandoned by a justice system that won’t back us up.”

The teen had previously been arrested on weapons possession charges.

In the wake of this incident, Mayor Eric Adams yet again called on state lawmakers to hold an emergency session to examine the state’s bail laws.

Video from the scene showed the teen with blood on his face, and police said the officer suffered swelling on his head and shoulder. Both were reportedly treated at New York University Hospital and released.

The MTA Board met on Monday to discuss subway safety and outreach services. The MTA says “homeless people on the trains” also ranked high on a list of things that need to improve to increase rider satisfaction.

Saxon is a prolific writer with passion for the unusual. I believe the bizarre world is always exciting so keeping you up to date with such stories is my pleasure
Previous Couple filmed having rooftop sex during record heatwave (Graphic video)
Next Man shot woman in neck, before bullet exited and killed him, Dallas PD says