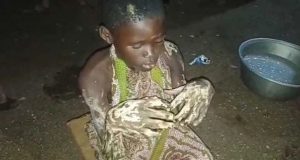 An 8-year-old girl is currently battling for life after her biological mother allegedly dipped her hands into boiling water as punishment for eating a coconut toffee worth 50 pesewas.

The heartbreaking incident occurred at Awutu Bereku in the Awutu Senya West District of the Central Region, Ghana.

According to starrfm.com.gh, the mother of the victim, Janet Awo, who is a petty trader, instructed her daughter to park their goods after the fateful day’s business.

Reports have it that the woman later found out that one of the coconut toffees costing 50 pesewas was missing.

She became uncontrollably furious and allegedly caned the little girl before dipping her two hands into the boiling water and fire, leaving her severely burnt.

The news website reports the grandmother of the victim, Comfort Amoaku, as saying that she became traumatized after seeing what her daughter had done to her own biological child.

The elderly woman disclosed that the matter has been reported to the Awutu Bereku Police station where medical forms have been issued to them since Sunday, July 31, 2022, to visit the hospital for treatment.

She, however, lamented how difficult it has been for them to raise GHC150 for the medical doctor to sign for the victim to get treatment. They have resorted to the use of local herbs to treat the severe-looking burn wounds.

Recounting her ordeal, the victim said that she ate the coconut toffee in question because she was hungry.

She went further to recall how her angry mother dipped her hands into hot water and fire as punishment.

Saxon is a prolific writer with passion for the unusual. I believe the bizarre world is always exciting so keeping you up to date with such stories is my pleasure
Previous Scottish Fisherman Recalls Moment He Was Attacked By Deadly 8ft ‘Mini Jaws’
Next Meet Indian Man Who Has Not Bathed in 22 Years (Video)