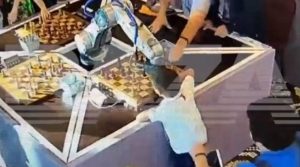 A chess-playing robot grabbed and broke the finger of a seven-year-old boy during an exhibition chess match at the Moscow Open, last week.

Trouble started when the child made his move and the robot grabbed his finger and held it for several seconds before he was freed.

“The robot was rented by us, it has been exhibited in many places by specialists for a long time. Apparently, the operators overlooked some flaws.”

Lazarev explained that, technically, it wasn’t the robot’s fault, saying that the child had “made a move, and after that we need to give time for the robot to answer, but the boy hurried and the robot grabbed him.”

Sergey Smagin, vice-president of the Russian Chess Federation, also agreed that the accident had to do with Christopher’s quick reaction to the robot’s move. He told RIA Novosti that “there are certain safety rules and the child, apparently, violated them. When he made his move, he did not realize he first had to wait.”

The robot had taken part in a number of competitions, including three matches without incident earlier that day. “This is an extremely rare case, the first I can recall,” said Smagin.

Saxon is a prolific writer with passion for the unusual. I believe the bizarre world is always exciting so keeping you up to date with such stories is my pleasure
Previous Man runs through town naked after friends strip him as Stag Do gets out of hand
Next Groom Abandons Bride During Marriage Ceremony After His Mother Calls Her Short And Ugly