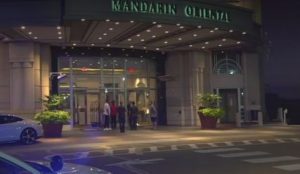 A man who was shot by his wife in a D.C. hotel room after she alleged he was molesting children at her Maryland daycare has been arrested, Baltimore County officials confirm.

Shanteari Weems, 50, of Randallstown, Maryland, is facing assault and firearm charges after police say she shot her husband then barricaded both of them inside their room at the Mandarin Oriental Hotel last week.

The Baltimore Police Department has confirmed that Weems’ husband is James Weems, Jr. a former officer.

Court documents claim Weems told officers that she had been married to Weems Jr. for five years and that they live in Baltimore. Weems said she owns a childcare center in Baltimore County and that she had recently received multiple calls from parents of the daycare accusing her husband of molesting their children, documents say.

FOX is told Child Protective Services shut the center down several days before the shooting.

Saxon is a prolific writer with passion for the unusual. I believe the bizarre world is always exciting so keeping you up to date with such stories is my pleasure
Previous Jewish leaders dish out heavy criticism after Adolf Hitler’s watch sells for nearly £1,000,000 at US auction
Next Tipper crushes father of 30 children to death in Nigeria