The Federal Road Safety Corps, FRSC, said a father of 30 children was killed when a tipper rammed his motorcycle in Lokoja, Kogi State, Nigeria.

The man, Abdulsalam Ibrahim, a 60-year old commercial motorcyclist and his passenger were crushed to death by the tipper truck at Ganaja Junction in Lokoja.

“The incident was tragic and very unfortunate,” he said.

He regretted that the accident cut short the life of the bread-winner of 30 children.

“The accident was a case of hit and run because by the time we responded to the distress call to the area immediately it happened, the driver and the tipper were nowhere to be found.

“Eye witnesses told us that immediately the accident happened, the tipper driver zoomed off leaving the victims’ mangled bodies on the road for sympathisers,” he said.

He said that officers deposited the corpse of man at the Morgue of Federal Medical Centre, Lokoja, while that of the passenger was at Ankuri hospital morgue, Lokoja.

Also speaking on the accident, Musa Baba-Aliyu, Chairman, Kogi Motorcycle Riders’ Association, said that the deceased rider was an indigene of Katsina and a bonifide member of the union.

Mr Baba-Aliyu said that Ibrahim was trying to avoid hitting a commercial tricycle (Keke NAPEP) heading towards him from the opposite direction, when the sad incident happened. 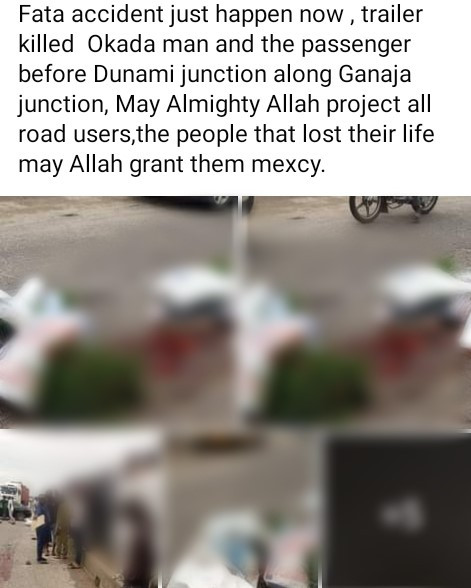 Saxon is a prolific writer with passion for the unusual. I believe the bizarre world is always exciting so keeping you up to date with such stories is my pleasure
Previous Man shot by wife in DC hotel room charged with multiple child sex abuse offenses
Next Blueface physically fights girlfriend Chrisean Rock in public (video)