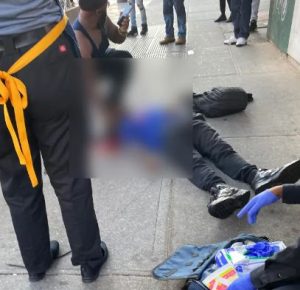 A McDonald’s worker in Brooklyn, New York, was shot during a fight over cold French fries.

The 23-year-old victim was working at the fast-food joint at 1531 Fulton St. in Bedford-Stuyvesant, New York, around 7 p.m. Monday, August 1, when a female customer started hassling him over her fries.

The woman, who complained that her fries were cold, was FaceTiming her 20-year-old son during the argument, and the son soon stormed into the restaurant and began fighting with the employee.

They took the fight outside the restaurant and the son brought out a gun and shot the worker in the neck, cops said on Tuesday, August 2.

The man is currently fighting for his life in a hospital.

“I feel like crying. You shot someone over French fries?” a witness, who owns a local business, to The Post on Tuesday.

Another witness said, “The co-workers, they were around [the victim]. They were on their phones, and they were crying.

A man took off his shirt and put it on the neck to try to stop the bleeding. [The victim’s] right eye was swollen shut.”

“He couldn’t talk,” the witness said of the wounded employee. “He was just shaking. His chest was heaving. He was still breathing when they put him on the stretcher.”

The victim remained in extremely critical condition at Brookdale Hospital in Brooklyn on Tuesday, sources said.

His distraught family and friends wept and consoled each other on the steps of the hospital’s emergency-room entrance Tuesday afternoon.

“He is a good guy,” a coworker told The Post.

A single .9mm bullet was recovered at the scene and the suspected shooter was taken into custody, police sources said.

Charges have yet to be filed.

The suspected shooter has been previously arrested several times, including for grand larceny in 2019 and assault and theft of service in 2018, sources said. He also has numerous sealed arrest cases against him, they said.

Saxon is a prolific writer with passion for the unusual. I believe the bizarre world is always exciting so keeping you up to date with such stories is my pleasure
Previous Groom Abandons Bride During Marriage Ceremony After His Mother Calls Her Short And Ugly
Next California burglar forgets keys inside crime scene, returns to pick them up