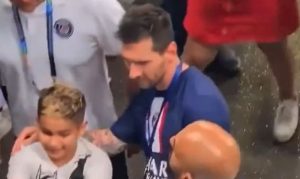 International football star, Lionel Messi on Sunday intervened when the guards were taking away a young fan who was trying to approach him.

The seven-time Ballon d’Or winner also took a selfie with the boy.

Drama started after his recent match for Paris Saint-Germain (PSG) in Tel Aviv, Israel, when Messi was walking down the stadium tunnel.

The young supporter ran up to him but was stopped by the security guards. As they tried to take him away, Messi intervened.

The boy dropped his phone in the commotion but got hold of it again as Messi put his hands on his shoulder and posed for a selfie. They both hugged before he was again taken away by the guards.

The young admirer was given a moment he would never, ever forget by the Argentine superstar through this act of compassion.

This young fan was being taken away by security but Messi stopped them so the boy take a selfie with him ❤️ pic.twitter.com/MHNfpSs2O0

The internet loved Messi’s gesture which was seen as very heart-warming.

One user wrote, “That kid is going to remember and talk about this moment for the rest of his life. This is what makes Messi GOAT apart from his out of this world skills.”

Saxon is a prolific writer with passion for the unusual. I believe the bizarre world is always exciting so keeping you up to date with such stories is my pleasure
Previous Bodies Of Sisters Found Holding Hands, Killed In Karnataka Landslide
Next ‘There’s no rest’ – Lady says her boyfriend suffers from 100 erections a day which tires her out